We are embarking on a exciting project to recreate the sound-world of Beethoven’s own quartet of instruments. In about 1800 Prince Lichnowsky gifted Beethoven instruments by Amati, Guarneri and Rugeri, which were used by visiting musicians including the Schuppanzigh quartet, who were essentially the first ever professional string quartet. We are currently testing instruments by these makers to create a matched set which will have a unique sound quality and tonal blend and will perform on them from 2020 in Beethoven’s anniversary year. We have commissioned some fascinating research on Beethoven’s instruments by Alessandra Barabaschi, which you can read below!

For more information about this project please email us at: carducciquartet@pobox.com 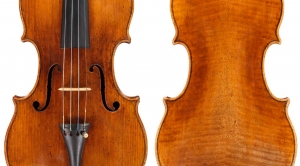 Ludwig van Beethoven was born on December 17, 1770, in Bonn (Germany) and moved to Vienna in November 1792. At the time, the capital of the Holy Roman Empire was characterized by an intense artistic life that had already attracted several musicians such as Vivaldi and Mozart.
Franz Joseph Haydn introduced the young Beethoven to a series of wealthy patrons and soon enough he became the protégé of Karl Alois, Prince Lichnowsky. The prince immediately recognized his talent, welcomed him in his residence, and granted him an annual stipend.
As connoisseur of music and enthusiast piano player Prince Lichnowsky hosted every Friday morning a string quartet at his place. Schuppanzigh and Weiss played a major role in it for several years, performing regularly at Lichnowsky’s in front of Haydn and Förster. Beethoven could profit from the valuable experience of this string quartet when he began to compose quartets himself.
In the course of his life Beethoven had owned at least six string instruments: three violins, one viola, and two cellos. At least four of them were presented to him by Prince Lichnowsky. The composer mentioned them in his so called ‘Heiligenstadt Testament’, drawn up on October 6, 1802. In this remarkable document Beethoven urged his brothers to preserve the quartet from Lichnowsky at their place, but not to argue about it and, in case of need, to sell it. Two things show how valuable he considered every single instrument to be: He mentioned only these four instruments in his testament and he felt the need to recommend his family not to fight over them.

Beethoven died in Vienna on March 26, 1827. Among some of his personal belongings that were auctioned in the following November there were also four
string instruments described as: a violin by Giuseppe Guarneri, a violin by Nicolò Amati, a viola by Vincenzo Ruggeri, and a cello by Pietro Guarneri.
Time went by and Beethoven’s string quartet seemed to have sunk into oblivion. Until almost twenty years later, on November 26, 1846, the sale of a violin by Nicolò Amati dated 1667, that had allegedly belonged to Beethoven, was advertised in a Viennese newspaper.
Soon after, on December 5, 1846, Aloys Fuchs, Member of the Imperial-Royal Court Chapel, found himself ‘prompted’ to reply that ‘Ludwig van Beethoven possessed a complete string quartet of excellent instruments by Italian masters, which was made a gift to him by his princely patron and friend Lichnowsky at the instigation of the famous quartet player Schuppanzigh’. Fuchs specified all four instruments and named their owners. His list differed from the one of the Viennese auction only in the case of the cello, Fuchs described is as a work of Andrea, not Pietro, Guarneri.
Fuchs’ announcement probably aroused the interest of the art dealer Carl Gotthelf Böhme who bought the four instruments. After his demise, the quartet was purchased by Peter Jokits, a ‘Serbian-born Viennese wholesaler’ of ‘Turkish goods,’ who presented it to the German Emperor, Wilhelm I. The instruments, as part of the Jokits Foundation, arrived in Berlin on October 1, 1861, and were brought to the former Royal Library, now Berlin State Library.

In 1889 Emperor Wilhelm II issued the order that Beethoven’s Quartet should be handed over to the Hochschule für Musik in Berlin, the music institute directed by the renowned Joseph Joachim. Eighty years later, in 1969, it was granted on permanent loan to the Beethoven-Haus in Bonn.9
Not all four instruments acquired by Böhme/Jokits corresponded with the list made by Fuchs in 1846. In the case of the former, the Amati violin was dated 1690 and the Guarneri cello was dated 1675. Both instruments were missing Beethoven’s seal.
In 1996,10 the Beethoven-Haus acquired another violin carrying an Amati label, whose characteristics correspond to the violin described by Fuchs, apart from the date on the label, reading 1676 instead of 1667. This was considered to have been a typo in the first advertisement, later copied by Fuchs.
A short time ago, a cello consistent with the description of the Pietro Guarneri auctioned in November 1927 was found. This instrument appears to have been part of the Lichnowsky set. It belongs to a private owner, who has agreed to exhibit it in the Beethoven-Haus, thus, the whole quartet will be reunited in Bonn from December 2019 onwards.
All labels contained in the Lichnowsky set have been proven to be forgeries. Nevertheless it is highly probable that both Prince Lichnowsky and Beethoven were convinced that these instruments were genuine Italian masterpieces and of high value. Otherwise the composer would not have urged his family not to fight over them. For the history of music they are priceless treasures by all means because they were Beethoven’s daily companions, his vital hand tools.

"a performance of supreme clarity, focus and precision." Gramophone Magazine

"…playing of constant variety, a masterclass in unanimity of musical purpose." The Strad

"...technical rigour, penetrative musical insight and lively yet unified individualism...winning in every sense of the word..." The Irish Times